Three of our fabulous young playwrights from Falconworks Theater's Off the Hook program had virtual performances of their new works with an incredible company of almost twenty volunteer actors/directors!  Thank you so much to everyone who gave their time and talents to these young artists!

I began facilitating Falconworks Theater's Off the Hook program.  Three young playwrights will write their first plays this spring and we'll produce them virtually in June!

Theater to the People was awarded our second Brooklyn Arts Council grant.  We will be recruiting our third ensemble and creating a new theater piece July-October 2021, with a new theme: "Dreams/Nightmares."

On Fri. 12/4, Creek and Kills released a new single, "December."
All money collected in sales for Creek and Kills music and merch from December 4, 2020 through until we say otherwise goes to these two great NYC orgs that are working to prevent interpersonal violence and promote gender justice:
https://www.connectnyc.org
https://herjustice.org

In October, my short plays On the Verge and Liberty Enlightening the World appeared in a virtual staged reading produced by Clutch Productions as a part of their empowHER Reading Series.

On Tues. 9/15, Creek and Kills released a new single, "September 15."  All money collected in sales for Creek and Kills music and merch from September 15th, 2020 to December 4, 2020 went to Center for Reproductive Rights and the National Network of Abortion Funds.

On Fri. 8/7, Creek and Kills released a new single, "The Parade Now."  All money collected in sales for Creek and Kills music and merch from July into September went to two NYC anti-racist organizations: The Audre Lorde Project and IntegrateNYC.

On Fri. 6/5, Creek and Kills released our new single, "Unstiching," as well as a beautiful video, edited by our drummer, Erin. All money collected in sales of any Creek and Kills music or merch on bandcamp during the month of June went to two amazing organizations doing anti-racist work in the Twin Cities: Black Visions Collective and Women for Political Change.

After receiving a 2020 Sokoloff Arts Fellowship, on Mon. 3/2, Theater to the People began sessions with our second ensemble at Brooklyn Arts Exchange, as a part of their Creating Space Series.  Three weeks later, after the COVID quarantine began, we switched to virtual sessions via video conferencing, and plan to release a short film (in lieu of a performance) to celebrate the creativity and resilience of our second TTTP Ensemble.

On Tues. 2/11, Creek and Kills hosted/curated an evening at Alphaville featuring Gang Box and Basic Bitches.

On Sat. 1/18, Creek and Kills hosted/curated an evening at The Way Station featuring our friends The Elgin Marbles, Faith NYC, and Miss Jane and the Morning After Band.  A fantastic and eclectic night of music! 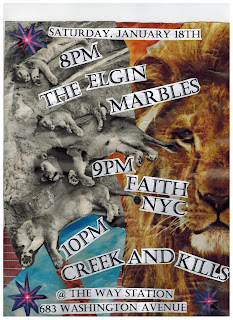 On Sunday, December 15th, my brand new short play Unnatural Gas was featured as a part of the empowHER Reading Series from Clutch Productions at Primary Stages Studios in Manhattan.  The artists of Full Circle came up with the theme of women's wellness to focus on and the six works shared on the 15th demonstrated the diversity of our voices and aesthetics beautifully.  I'm so proud to be a part of such an inspiring group of theater and film artists! 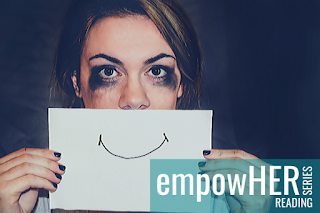 Creek and Kills had a busy December!   On December 5th, we played Thursdays for the Cause at Our Wicked Lady (with guest drummer Jon Quinn again...thanks, Jon!).  The evening was raising money for Sane Energy which is fighting against a natural gas pipeline that's planned to be installed under most of Brooklyn.  Not cool!

Then on Sat. 12/7, we celebrated our friend Ian's birthday at The Footlight with his band The Subtexts, as well as The Whores, Hekla, and Basic Bitches.  You cannot get a more rocking line-up than that!  It was a great night. 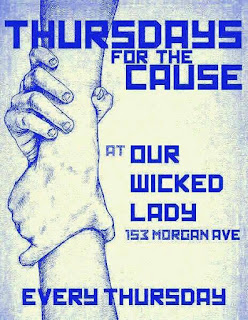 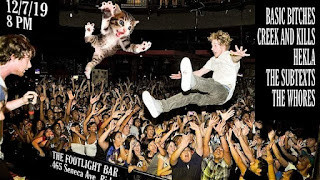 Finally, we closed out the holidaze on Saturday, 12/28 by hosting/curating our Ladycentric Rockalicious series (Volume IV!) at Branded Saloon with Que Sick and The Whores. 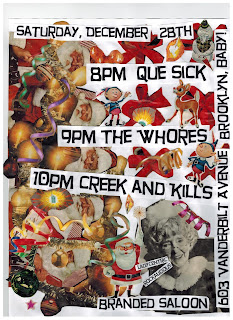 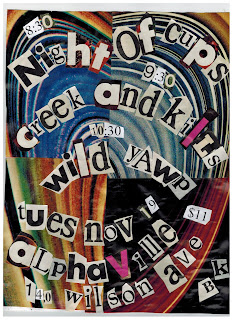 Creek and Kills played at the Bushwick venue Alphaville on 11/19/19 with the amazing bands Night of Cups and Wild Yawp.  So fun!  I am a huge fan of both those projects...it was such a great night of music.  Special thanks to our special guest drummer Jon Quinn who is super-fun to play music with! 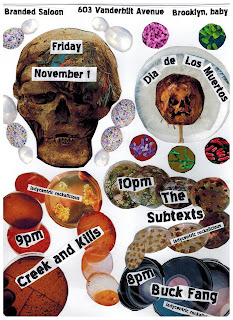 Creek and Kills returned to Branded Saloon for Ladycentric Rockalicious Vol. III with our friends Buck Fang and The Subtexts (although, sadly, there was an emergency so The Subtexts didn't play, but their guitarist Ian brought out some solo stuff, so that was cool!).  It was Dia de Los Muertos, so Marc and I celebrated with sugar skull face paint...also big thanks to Heather Wagner of Buck Fang for being our guest drummer that night!  And here are more fantastic photos of the night from our generous friend Patrick Bryant:

Creek and Kills Album Release was on September 20th, with an AMAZING party to celebrate at The Way Station featuring Fisty, The Shook Ones, and The Lousekateers. Our friend Patrick Bryant was there and took some great photos...thanks, Patrick!

We also released our first video for the song "Scaith":

I finished off the month by being invited to read for the Columbus Library Writers' Circle Salon on Sept. 28th, a thriving group of writers of many genres that started from a memoir-writing class I taught there two years ago.  It was so great to see many of my former students and to be able to share with them an excerpt from my novel-in-progress (as of yet untitled).  Got my juices flowing to write more prose again! 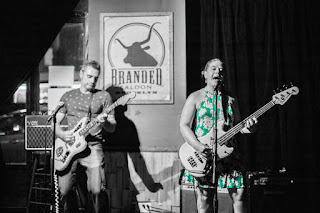 Creek and Kills kicked off our hosting and curation of "Ladycentric Rockalicious Vol. I" at the Branded Saloon with Amandla Turner and Fisty on July 5th.

I was invited to write a very short play for the 5th Annual One Minute Play Festival.  My first-ever-to-be-produced one-minute play Broken Heart with Rhinestones premiered at the New Ohio Theatre June 2-4th.  60 playwrights wrote brand new super-short plays this year, and over 100 theater makers were involved in bringing the work to life!

The last two sweltering days of June were spent filming the first Creek and Kills video for our single "Scaith."
This roof was unbelievably hot...I don't think I've ever sweat that much in my life...thanks to Patrick Bryant for documenting the day so wonderfully. 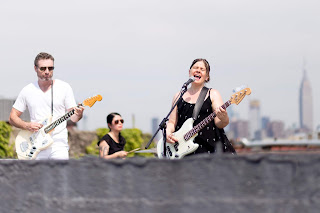 And Saturday May 25th, TRE opened for the Lousekateers at their album release party at Yonkers Brewery. 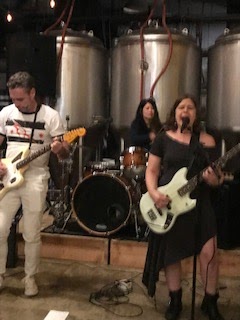 The first Theater to the People: HOME ensemble shared their devised work-in-progress at BAX/Brooklyn Arts Exchange on Saturday, 4/13, 7pm.


Theater to the People: HOME
A workshop performance and discussion
Directed by Julia Cavagna and Kate Bell
Facebook and Instagram: theaterttpeople 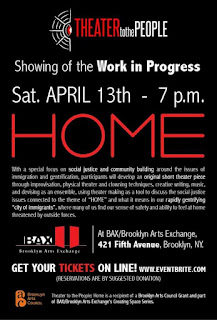 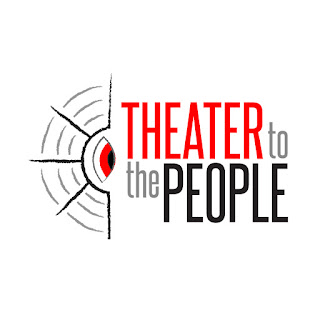 Physical theater artist/actress/director Julia Cavagna and I kicked off our "Theater to the People: HOME" Project at Brooklyn Arts Exchange as a part of their Creating Space Series.  We received a grant from Brooklyn Arts Council to support the project.

Kate
Kate Bell is a playwright, singer/songwriter, and teaching artist.